The situation for pubs in the UK seems to be improving with a steady growth in both consumer income and confidence following the recession. The pub remains one of the most popular leisure activities there and the returning consumer confidence is allowing people the opportunity to trade up.

At a time when only a quarter of UK consmers would describe their financial situation as ‘healthy’, dining out in pubs and restaurants as well as going to the pub for a drink remain the most popular leisure activities there with three in 10 having done this more than once in the month to October 2015, according to The Leisure Tracker, a survey released late last year by Mintel.

Commissioned and published by the Publicans Morning Advertiser trade magazine in the UK, the survey found that although nearly a third (31%) of Britons still regard their financial situation as ‘tight’ or ‘struggling/in trouble’, their situation seems to be improving with a steady growth in both consumer income and confidence following the recession allowing them the opportunity to trade up.

A third of adults visiting the pub only for drinks spent more than £20 on their last pub visit indicating that ‘buying rounds’ remains commonplace, but it also shows the opportunities for venues to stock more expensive drinks such as sparkling wines and premium spirits.

The continued rise of craft beer indicates another way that publicans could encourage drinkers to spend more in their venues.

Despite significant shrinkage of the UK’s pub landscape over the past decade, the pub itself continues to remain popular with British consumers.

The rejuvenation of ‘pub grub’ appears to be alive and well and many of the best-performing pubs in the UK have been those that reduced their dependency on drink sales and acknowledged the importance of an appealing food menu. 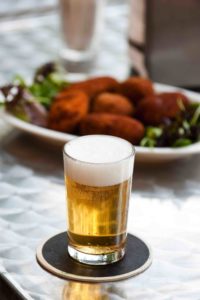 All age groups are equally likely to have gone to the pub for a meal, underlining its cross-generational (as well as unisex) appeal.

As is the case here in Ireland, food remains the key to driving visitor numbers in the UK pub market. In the month to October 2015, when presented with a list of pub-related activities, 26% of UK pub-goers went to a pub because of its high quality food.

Over-55s were particularly likely to do this (33%) indicating that a quality food menu could be an effective way of tapping into the often affluent and time-rich older demographic.

Leveraging menu enticements such as hand-made dishes, locally-sourced and seasonal ingredients help substantiate a pub’s claim of having a premium food offering.

Mintel’s Leisure Tracking survey found spend for dining in UK restaurants and pubs to be broadly similar although restaurants gained a higher share of customers who spent more than £40 on their last visit (29% vs 21% for pubs).

One-third of adults who ate in pubs in the month to October last year spent less than £20 on their meal (including drinks) with women more likely than men to do so (37%). This signals the importance of affordable menu items in appealing to lower spenders.

Pub dining/catering is the most popular leisure activity, with 31% of adults having eaten in a pub more than once within the past month, marginally ahead of the number of British consumers who’d eaten at restaurants.

While men would be more likely than women to go to the pub for drinks (60% vs 43%) no gender difference applies when it comes to going to the pub for food, underlining how food can be a good way to entice women into pubs.

What’s more, all age groups are equally likely to have gone to the pub for a meal, underlining its cross-generational (as well as unisex) appeal.

Pubs and restaurants are also very similar in terms of who their patrons visit with and dine with. In both cases half of visitors do so with their partner, showing how important couples are to food sales. Reflecting this trend, special ‘couples’ offers on set dishes could be an effective way for venues to stand out in a crowded market. 27% of customers in UK nightclub/late night bars spent more than £40 on their last night out in these venues.

Falling numbers have hit the nightclub sector in recent years but while fewer people visit clubs average spend remains relatively high. 27% of customers in UK nightclub/late night bars spent more than £40 on their last night out in these venues.

Millennials are the most likely group to participate in all of the leisure activities stated in the survey, reflecting a greater willingness to do things out of home.

Participation rates in leisure activities drop off notably among over-45s but hold up for food-led activities such as pub catering.

When it comes to pub visiting for drinks only, although 40% of people who’d been to the pub only for drinks had done so with their partner, they were more likely to have met up with friends.

Pub visiting trends and on-trade drink volume sales indicate that broadly the same number of British consumers are going to pubs as in previous years but they’re often drinking less on their visits.

Only 7% of pub goers have followed a pub on social media. Although social media gives leisure outlets a chance to build engagement it still appears to be more of a secondary factor when it comes to driving choice.

However 18% of pub-goers check a pub’s website before deciding whether to visit, with women most likely to do so at 23%.

That women are significantly more likely than men to have ordered a lower calorie drink or dish (13% vs 6%) suggests that calorie information on the website would also probably be well-received by women in particular.

Displaying comprehensive details of food and drink menus and even daily specials and current guest ales could be the difference between securing a customer visit and not, concludes the Mintel report.