The industry claims that there’s a disconnect between targeting this sector for growth/expansion as per the government’s Foodwise 2025 strategy document and the government’s own policies on price, taxation and regulatory costs in relation to alcohol.

The drinks industry represents a major driver of economic activity across the Irish economy at a macro and rural level.

“The value of gross output from drinks manufacturing in Ireland is €3.2 billion in 2014,” states a recently-published report Sustainable Development of the Drinks Industry by Agri-food Economist Ciaran Fiztgerald.

Apart from the obvious explosion in the popularity of Irish whiskey around the world, 43% of beer produced here is exported, accounting for 19% of all beverage exports.

The drinks industry has therefore been identified by government as a key growth sector with potential to grow exports.

In its Foodwise 2025 strategic plan for the drinks industry the government requires private sector investment of at least €1.15 billion.

To meet the Government’s Foodwise 2025 targets would envisage Ireland’s drinks industry growing exports by at least €700 million, creating an additional 7,210 jobs in the Irish economy.

But the drinks industry itself claims to have the potential to grow exports by at least 85% to €2.2 billion over the next 15 years, creating and sustaining an additonal 13,000 jobs, predominantly in rural Ireland.

This springs from a not unreasonable ambition to grow the Irish whiskey sector to 30 million cases.

So the key role the drinks sector plays in the regional and rural economy as well as in the tourism sector remains crucial. The key role the drinks sector plays in the regional and rural economy as well as in the tourism sector remains crucial.

But there appears to be a mote in the eye of government, for the report warns, “There’s now a clear disconnect between the Government’s targeting of the drinks industry for growth and expansion and some of the emerging policies on price, taxation and regulatory costs.

“These are inconsistent, lack an evidence base for proportionality and will ultimately act as a barrier to local and inward investment.”

Such government-induced barriers place Irish-based businesses at a disadvantage to other jurisdictions and fundamentally undermine the export-led economic growth of the sector.

In contrast to the sector’s substantive contribution to the Irish economy, its route to market costs in the domestic market through imposed taxes and increased compliance/regulatory costs are undermining the sector’s capability to maintain its economic impact.

Taxation a barrier to industry’s growth

The report cites excise and VAT taxes on alcohol here as being the second-highest in the EU, four times the EU’s average alcohol tax rate. Irish alcohol prices are therefore consistently 60% above the EU average as measured by Eurostat.

“Not only have taxes on alcohol increased while consumers’ incomes decreased” explains the report, “but excise duty and VAT as flat rate taxes mean that people on lower incomes are spending a higher proportion of their income on tax”.

Therefore any notion that alcohol has become more affordable in Ireland despite higher prices is incorrect, states his report.

As well as the overall decline in consumption, there’s been a dramatic shift in the location of consumption from the pub to the home since 2001.

Additionally, industry commitment to responsible consumption regulation costs it €30-40 million per year beyond normal compliance costs at a time when very little cognisance is taken of what is actually effective in combatting alcohol misuse.

As the report points out, “The imposition of high taxes and regulatory costs is not economically sustainable and will only serve to undermine the economic contribution of the sector and curb its growth.”

The report also points out that the imposition of additional regulatory and compliance costs is completely at odds with the Government’s stated principals of better regulation. “Layering of regulatory costs on top of compliance costs acts as a poor signal to multinational and domestic investors in the alcohol sector,” points out Ciaran Fitzgerald.

The report argues this in some detail.

“The industry’s compliance, the associated costs and the continuous restrictions are not recognised in the Government’s planned Public Health (Alcohol) Bill 2015. In addition to this is the question of whether the proposed legislation is grounded in strong evidence. The OECD’s guiding principals for good regulation state that regulation should ‘have a sound legal and empirical basis’.”

The author deconstructs the government’s ‘raise the prices’ argument: “Take for instance the proposal to introduce Minimum Unit Pricing, included as part of the Public Health (Alcohol) Bill. This will effectively result in an increase in the vast majority of drinks prices in an attempt to decrease alcohol consumption. “The continuing attempt to use increased price as a means of addressing alcohol misuse is not only hugely unfair to responsible consumers but much research has shown that the heaviest drinkers are not responsive to price increases”.

Similarly research into alcohol bans found that, ‘Overall, much of the research demonstrates that advertising bans have little or no effect on total alcohol consumption’.

Citing various research reports which argue against the price/advertising restrictions argument for alcohol abuse, the report concludes, “The empirical evidence surrounding alcohol pricing and restrictions on advertising raise questions regarding their efficacy and by extension the Government’s consideration of the OECD’s suggestions of providing a strong empirical base for regulation. With these proposals it also appears the Government is disregarding the requirement to be targeted and proportionate in its measures.”

The author argues, “There is much published research that does not support the regulations proposed in the Public Health Alcohol Bill. Dissenting, peer-reviewed research has been ignored and supportive evidence appears to have been cherry-picked from other jurisdictions. Not only do the measures not adequately target those whose consumption causes harm, it meets neither the Government’s own nor the OECD’s frameworks for good regulation”. 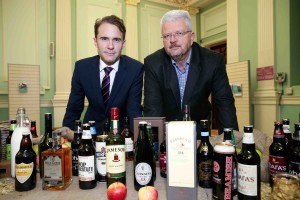 From left: ABFI’s Ross MacMathuana with Economist Ciaran Fitzgerald at the launch of the report.