Young people account for over 50% of the workforce in the majority of Irish pubs according to data supplied by the Licensed Vintners Association and the Vintners Federation of Ireland, who, along with Drinks Ireland, have called for a temporary reduction in the hospitality VAT rate from 23% to 9% and its extension to alcohol sales in the on-trade until the 31st of December. 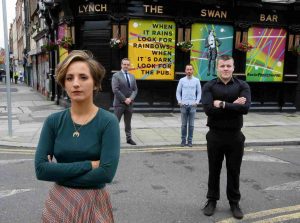 Young people account for over 50% of the workforce in the majority of pubs. Part of the #NewGovProtectOurPubs campaign are (from left): The Swan Bar’s Ola Rojeck, Swan Bar proprietor Ronan Lynch, Macdara Ó Móráin and Martin Murphy from the Swan.

While approximately one-third of Dublin pubs remain closed, outside the capital more than 60% of pubs have not re-opened as businesses that do not serve food must remain closed.

The VAT rate reduction on alcohol is being sought to safeguard 22,500 jobs (mainly young workers) in view of the Government’s July Stimulus Package to be announced next week.

Research commissioned by the three organisations has found that pubs are likely to suffer a 50% decline in business for the remainder of 2020 – the most optimistic market expectation.

“A reduction in the hospitality VAT rate is not enough,” according to LVA Chief Executive Donall O’Keeffe, “It needs to be extended to alcohol as this is the only measure that will support the pubs that are still closed and have been for four months. The reduced demand, due to Social Distancing, limited customer visits and lower consumer demand, will impact the employment potential of pubs and their ability to bring staff back.”

One of largest employers of young people

The drinks and hospitality industry is one of the largest employers of young people and in the majority of pubs across the country, young people account for over half the workforce.

“Equally, the nature and model of hospitality businesses means we rely heavily on part-time staff to cover the busy periods: evenings, weekends, seasonal periods and holidays such as Easter, Summer and Christmas – those staff tend to be younger workers,” he added.

‘We must ensure that Covid does not unfairly and unnecessarily disadvantage our younger generation, like what happened in the recession, by helping drinks and hospitality businesses to maintain jobs in the sector,” he concluded.

The three organisations believe that the effectiveness of a VAT reduction on on-trade alcohol is “unquestionable” and would deliver immediately and tangibly for businesses.

“Our members employ huge numbers of our younger generation and we need support to keep our heads above water as we re-open with reduced demand and increased costs,” stated VFI Chief Executive Padraig Cribben, “We can’t have a situation where any job losses would have a substantial impact on one demographic in society – one which both work in and enjoy the drinks and hospitality industry, so it would mean a double blow.

“Equally, for an industry that’s regional and employment-intensive, a VAT cut to boost pubs would have a disproportionately high impact on under-invested regions.”

VAT cut would benefit business rather than stimulating demand

It has also been pointed out that such a highly targeted measure would benefit businesses rather than stimulate demand.

“Our proposal is both radical and far-reaching and its effectiveness is unquestionable. It will have an immediate effect by reducing costs for 7,000 small businesses across the country. Such a policy measure has not been implemented in Ireland before and we now know it can be done.”

The sector could, with the right support, help drive Ireland’s economic recovery after the Covid lockdown, believe the three organisations.

In the UK, under the ‘Plan for Jobs’ scheme, Chancellor Rishi Sunak has announced that the government will provide employers in England with £2,000 for each new apprentice up to the age of 25 that they take on and £1,000 for each over 25 between August and the 31st of January.

The government already has in place a £1,000 payment to employ new 16- to 18-year-old apprentices.

He pointed out that some 91% remain in work following their apprenticeship or go onto further training.

Further funding is in the pipeline for employers taking on young people into apprenticeships there.

Follow the ‘Protect our Pubs’ campaign at #NewGovProtectourPubs on social media.