Both ale and stout have begun to reverse a long-time trend of decline by showing growth, with Nielsen Ireland figures indicating that ale sales values rose 1.9% MAT to €186.3 million in the on-trade to the end of December 2016 and 15.1% in the off-trade to €29.1 million (excluding Dunnes Stores and the discounters).

There’s been renewed interest in stouts and ales as a result of innovations and new developments in these beer categories. This has helped grow their overall market share in the beer sector.

And across all channels, value is moving ahead of volume at the moment reflecting ‘premiumisation’ in these markets.

“Looking across the categories, there are more drinkers in this category now” says Alex Hughes, Head of Category at Diageo Ireland, “so consumer penetration in beer is up 1% from last year and Millward Brown’s research indicates that some 82% of consumers claim to have consumed beer in the last four weeks where wine shows flat during this time period with spirits being up.

“But 2016 has been an interesting year for the ale and stout market,” he comments, “Through the Summertime, temperature-wise it was one or two degrees warmer in July and August.

As a result there’s been a slight reshaping of the ale market with lager and cider both growing LAD market presence.

This is one of the factors that can hold back on-trade stout sales but the figure for stout drinkers, at 600,000 overall, indicates that another 32,000 have entered the category in 2016 compared to the previous year – thus more drinkers but less per capita volume.

Diageo Ireland itself made the bold decision to allow its brewers a free hand in seeking out new tastes in ales and stouts and so Nitro IPAs, Pale Ales and Golden Ales became part of the St James’s Gate lexicon with the opening of its Open Gate Brewery. This now serves up several stout and ale variants including Dublin Porter, West Indies Porter, Open Gate Brewery Milk Stout and Smithwick’s Blonde as well as Whisky Barrel Fermented Ale – and of late, Dublin Amber Pale Ale exclusively for Dublin publicans in celebration of the 200th Anniversary of the foundation of the Licensed Vintners Association.

Autumn – and with the onset of (slightly) colder weather Guinness has been back in growth especially in the last quarter, reports Alex Hughes.

Stout remains the second-most consumed beer type in both the on- and the off-trade across the Island of Ireland.

As stated earlier, the advent of greater consciousness of craft stouts and ales has been largely responsible for this resurgence in interest in stouts and ales as a whole and it’s a resurgence that’s lifted all boats including those of the major brewers.

A report into innovations in beer by Mintel found 46% of consumers drinking stout in pubs, bars, nightclubs and restaurants in the previous six months while 19% drink it at home.

Ale enjoys a share of around 8% of LAD sales in the on-trade and 4.5% in the off-trade.

Mintel’s Innovations in Beer report found that 25% of consumers had drunk ale in pubs, bars, restaurants and nightclubs in the previous six months while just 16% had drunk it at home during this period.

But ale continues to show growth in both the on- and off-trades of late.

Smithwicks remains the Number One-selling ale, but the smaller fringe craft ales can be noted coming through (albeit off a small base) with on-trade ale growing share fastest.

Craft breweries would account for around 25% of this ale category and Alex Hughes predicts that we’ll continue to see some “healthy growth” from the ale market with low single digit growth across the board.

From a category point-of-view one can see dynamic changes in both the on- and off-trade ale markets.

What he terms ‘regional heroes’ are beginning to pinch away at the larger craft beer suppliers’ share of this market.

Ale has been growing in the takehome trade, welcoming another 38,000 consumers, but “there’s more fragmentation in the takehome trade with so many different brands landing onto the market,” says Alex, pointing out that there are over 1,500 different Stock Keeping Units now on sale in retail outlets around the country where there would have been just 700 or so last year.

But it’s worth keeping in mind that just under 3% of this range accounts for around 50% of the trade in ale.

Diageo Ireland’s research indicates that in both ales and stouts, shoppers provide a good even balance of buyers throughout the week where some 80% of lager is consumed between Friday and Sunday.

“For ale and stout, 21% is consumed on Mondays & Tuesdays,” says Alex, “This is up 12% from last year so a lot more people are choosing to drink ale early in the week.

“It’s seen very much as part of people going out and enjoying it during the week, part of a more routine consumption.”

He points out that the casual get-together is a socially-driven phenomenon in the pub.

Ordering ale or stout is considered more of a ‘relax and unwind’ occasion and there has been a strong increase in demand for both ale and stout for such a occasions, he says.

Diageo’s research indicates that 61% of ale drinkers are male as are 73% of stout drinkers, but only 46% of cider consumers are male.

Ales and stouts are beginning to appeal to Millennials, especially with the advent of the Open Gate range, believes Alex.

“Therefore there’s promise here from an on-trade perspective of a pickup in demand for ale and stout from Millennials.” Smithwick’s has once again joined forces with the National Homebrew Club for the Smithwick’s Homebrew Challenge 2017, to brew a Summer Fruit ale. The winner will be given the opportunity to come behind the gates of the Brewery at St James’s Gate to brew their winning ale to 30 kegs – a once-in-a-lifetime opportunity for any brewing enthusiast who’ll also receive €1,000.

Now in its second year, the Challenge celebrates the ups and downs of brewing whether it’s an experiment at home with friends or in the brewery – the one constant is a love of great-tasting beer. Each brew entered will be tasted by a panel of expert judges, professional taste-testers from St James’s Gate and members of the National Homebrew Club.

The beer will then be made available on tap in the Open Gate Brewery bar for a limited period. The winning brewer will also get a supply of the winning brew to enjoy with friends and family.

Paul Dunkin, Smithwick’s Senior Brand Manager, commented, “The Smithwick’s Homebrew Challenge is all about celebrating the great beer being brewed by homebrewers up and down the country and hopefully inspiring even more people to give it a go.”

Brews must be received by 21st April 2017. Information on how to enter is available at www.Smithwicks.com/homebrew.

Qs & As with Sullivan’s Ale How did Sullivan’s Brewing Company come into being and why so named?

Sullivans Brewing Co’s roots stem back to 1702 on James Street in Kilkenny, one of the oldest commercial breweries in Ireland, named after the Sullivan family who owned it for generations, before one fateful day in 1918 when it was bet on a horse in Deauville in France and lost. It then fell into the hands of the Smithwicks family, who decided to resurrect it in Kilkenny, a city with over 800 years of brewing tradition.

We offer a Maltings Red Ale on draught, brewed the traditional way from a blend of four Malts, three choice hops and a cask ale yeast for our ‘no rush’ fermentation that brings out the most layered and balanced biscuity flavour with soft caramel notes.

What can the trade expect in the next 12 months?

Our Maltings Red Ale to expand availability from existing select -outlets in Kilkenny & Dublin to other lively regions around the country, namely the Midlands, the West and the North of Ireland. We sell in our brand face-to-face with each customer with our master brewer Ian Hamilton and members of the great Sullivans & Smithwicks families who are behind this re-launch of one of Irelands oldest and well renowned breweries.

How do you distribute your beers?

We have signed a strategic agreement with Dowd’s Lane Co-operative (craft division of C&C), the biggest distributor on the island. It’s focus on methodically and creatively building craft beer brands across its portfolio serves as a very efficient approach for customers to leverage their ‘one stop shop’ approach to distribution, quality services and billing.

Can you tell us a bit about the head brewer?

Ian Hamilton brings a wealth of knowledge to Sullivan’s with 35 years’ experience in brewing between Ireland, the UK and West Africa. Ian has been involved with the production of World class lagers, Ales and stouts, having held a number of key positions including Technical Controller, Guinness Nigeria 1995-1998 and Head Brewer and Site Director of Smithwick’s Brewery in Kilkenny from 2001 to 2013. He also holds a Science Degree and Master Brewer (Institute of Brewing & Distilling London) and is widely considered one of Ireland’s most experienced technical brewers. He has received a Civic Award from the Kilkenny Borough Council in recognition of his contribution to the economic, social and civil life of Kilkenny during his career with St Francis Abbey Brewery, Kilkenny. 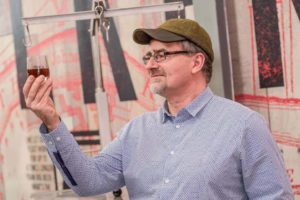