Martin Miller’s ‘Super Premium’ gin was launched to the market in 1999 “… at a time when you could hardly give gin away,” remembers David Bromige, Co-Founder & Creative Director of Martin Miller’s Gin, who gave a Miller’s Masterclass in the Sidecar in Dublin’s Westbury Hotel recently. 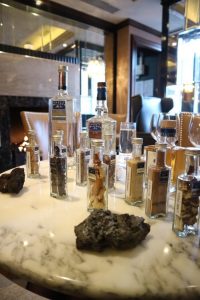 The brand has been around in Ireland since 2002 and resulted from research undertaken by the trio of Martin Miller himself and his partners David Bromige and Andreas Versteegh who, together, had launched Pulsar Icelandic vodka onto an unsuspecting market (which William Grant & Sons later bought, re-branding it ‘Reyka’).

But Martin had always had an eye to what’s happing in the gin world.

“Researching vodka had given us a lot of provenance into younger drinkers,” remembers David, “So we’d a lot of insight from people who were gin-drinkers and young mixologists who were into vodka.

“These mixologists saw that gin was at the heart of so many cocktails but they hated the taste.”

The reason for this was simple – Juniper – a not uncommon reaction among younger people to the herb. They set about changing that.

Indeed the idea of setting up Reform Spirits came about as a means of them looking into ‘dead’ categories.

Alas Martin passed away a few years ago but his spirit lives on in Martin Miller’s gin which boasts a couple of USPs such as removing the Orange and Lemon and distilling it separately from the Juniper, Cassia etc.

Lime peel is added to both distillates to “bridge and blend” and finally, pure Icelandic water – with a purity of 6-8 parts per million – is added to give that unique mouthfeel.

Icelandic water also helps soften the nose enormously to the point where it can be drunk neat, claims David.

The high surface tension of this pure water also forms a strong barrier between the air and the volatiles in the spirit, providing a much better balance on the nose.

“We’d come up with a great traditional English gin transformed by ‘soft’ alchemy,” says David, “no one else was doing this.”

Launched towards the end of 1999 big volumes evaded them but the market was growing, albeit slowly. And then the market for gin took off in Spain – which remains Martin Miller’s biggest market to date. But now, Australia and Asia are rapidly opening up to the brand, claims David.

Martin Millers Gin comes in three formats – Original (40% ABV), Westbourne and (Solera) 9 Moons which is aged for 10 months or so in Bourbon Oak casks – used mostly in Old Fashioneds. David Bromige – “The Bloody Mary was originally a gin-based drink.”

It’s the unique balance of citrus and Juniper where the Juniper elements are tempered by the effect of the Icelandic water, so you get a very soft gin in terms of nose & palate but it’s still 100% gin.

What is a Super Premium Gin then?

We wanted to broaden the church of gin and welcome in a whole new generation of people. People wanted something a little more premium and interesting than what was out there at the time and so we’ve a Super Premium to the Premium gins. People want something better in taste. As soon as we made something that was measurably better, it came with a price tag. It’s already expensive for us to produce.

Any trends in G&T consumption in the on-trade?

The key thing I’m noticing is the demand for something with a dry palate; I’ve noticed a taste change towards much more sophisticated and bitterer tastes rather than just sweetness; Umami has become important. Cocktails are more sophisticated and varied now. I know of one person in Thailand making cocktails from fermented honey….

How are pubs keeping presentation alive?

It’s more a question of reflecting the fact that the cocktail consumers are growing up. The showbiz is going out of it and people now appreciate a really good, well-made classic cocktail. Rather than super-elaborate cocktails that were too much when one got ‘super-exuberance’, everyone realises that the old rules and the basics have to come back for everyone to do it really well.

I still think it’s the foremost mixable spirit. Always has been. Vodka is nothing other than an alcohol – it doesn’t bring complexity. The Bloody Mary was originally a gin-based drink.