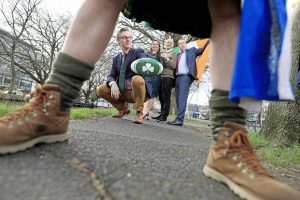 Ireland now has 31 distilleries to Scotland’s 133 but, at just over €1 billion, Irish whiskey sales are now approaching one quarter of those of Scotch around the world.

On Brexit Day – and ahead of the Six Nations match between Ireland and Scotland – Drinks Ireland|Spirits hosted the Scotch Whisky Association in Dublin for their annual bilateral meeting.

With Britain officially having left the EU at 11pm last Friday, the meeting was dominated by the challenges and opportunities faced by industries in both countries.

Brexit offers opportunities for Irish industry as Irish whiskey will now be the EU’s largest whiskey category, with the potential to grow in both new and established markets in the EU and in third countries that have trade deals with the EU.

Both industries, however, will continue to face mutual challenges on which cooperation will be key. For example the US has imposed tariffs on Scotch whisky, on single malt Irish whiskey produced in Northern Ireland and on Irish Cream as well as other Irish liqueurs.

Given increased trade disruption, both organisations have agreed to greater cooperation to bolster more open trade for Scotch whisky, Irish whiskey and Irish spirits around the world.

To coincide with the meeting, Drinks Ireland|Spirits released an industry league table, highlighting the difference between the two industries in terms of relative size.

“While Scotch whisky is much more established and still dominates in the global market, the sale of Irish spirits products is growing faster than their various rivals, with Irish whiskey in particular retaining its place as the fastest-growing Premium spirit category in the world,” said Drinks Ireland|Spirits’ new Chairman and Managing Director of The Shed Distillery in Co Leitrim Pat Rigney, “While both industries compete against one another in many markets Brexit and global trade uncertainties and disruptions mean that we also must work together to do what we can to encourage more open trade agreements.”